This article is for those cyber crooks who leave no stone unturned to malign Islam but fail to take note of their own heritage.

Vedic medicines were based on the mistaken notion that diseases were caused by evil spirits.

THE VEDA enthusiasts often assert that the ‘Atharvaveda’ is full of information about curing fatal diseases. Influenced by such propaganda, many people blindly believe that Vedas contain all knowledge including knowledge of medicine. This notion is often tied with the idea that Indians were far ahead in medical knowledge which was the direct result of their studying the Vedas. Nothing can be more false than this, as we will analyze.

Ayurveda has nothing to do with Atharvaveda

In ancient India medical science was known as ‘Ayurveda’ (‘Ved’ or knowledge of health or longevity). Owing to the word ‘Ved’ in ‘Ayurveda’, many wrongly attribute this branch of science to ‘Atharvaveda’. But the fact is that the word ‘Ayurveda’ has nothing to do with the ‘Atharv’ or any other ‘Ved’. This word is not found in any of the ‘Vedas.’ This word in fact is conspicuous by its absence even in the ‘Brahmans’ and the ‘Upanishads’ which were written after the ‘Vedas.’

The word Ved in ‘Ayurveda’ means ‘branch of science or a section of knowledge‘. The Sanskrit dictionaries give the meaning of the word ‘Ayurveda’ as ‘the science of health or longevity‘. In the ‘Brahman’ literature there are other ‘Vedas’ (branches of knowledge) such as ‘Sarp Ved’, ‘Pishach Ved’, ‘Itihas Ved’ and ‘Puran Ved’ (Gopatha Brahman 1/10; Shatapath Brahman 13:4:3). In these passages of the ‘Gopatha and Shatapath Brahmanas’, the word =Ved‘ means branch of knowledge.

.That branch of knowledge which tells things which are conducive and which are harmful to life is called ‘Ayurveda’. (Charak Chapter 1, 1/40).

Sushrut defines the ‘Ayurveda’ as the branch of knowledge which enhances life. (Sushrut Samhita Chapter1).

The early books on ‘Ayurveda’, are Charak Samhita and the Sushrut Samhita. The former is a composition of Charak, who lived about 200 B.C. The latter was composed by Sushrut much later. The word ‘Ayurveda’ was perhaps first used in Charak Samhita where it is stated:

Brahma was the originator of Ayurveda. He taught it to the twin-born Ashwani Kumars. They taught it to Indra.. (Charak Samhita, Sutra Sthanam, Chapter 1)

Besides, Charak also remarked that it was superior to the other Vedas, for this branch provided knowledge about life which was the basis of all pleasures and joys and good deeds (Charak 1-1-42)

Sushrut, overwhelmed by the popularity of the Vedas in his times, subordinated the Ayurveda to the Vedas. Finding no affinity whatsoever between the Atharvaveda and the Ayurveda, he declared that the latter was an upanga (minor part), of the former (See Sushruta Samhita 1.1/5). That is why there are imitations of the Atharvaveda in the Sushrut Samhita which undermine the importance of scientific data contained in the latter.

Later scholars refused to accept subordination of Ayurveda. Vag Bhatt said: “Ayurveda is not an upanga (sub-part) but an Upaveda (a secondary Ved) (Ashtanga Samgraha 1-1-8). The Mahabharat also says so.

The statement of Sushrut was not a balanced one, for he himself says that the Ayurveda was composed of one lakh verses whereas the Atharvaveda contains some six thousand verses and one thousand prose lines. To brand such a vast thing, the upang of such a tiny body is illogical.

Now let us analyze the medicinal prescriptions of the Vedas for various ailments and what they contain.

1. For the cure of cough, the prescription in the Atharvaveda is a prayer to cough: 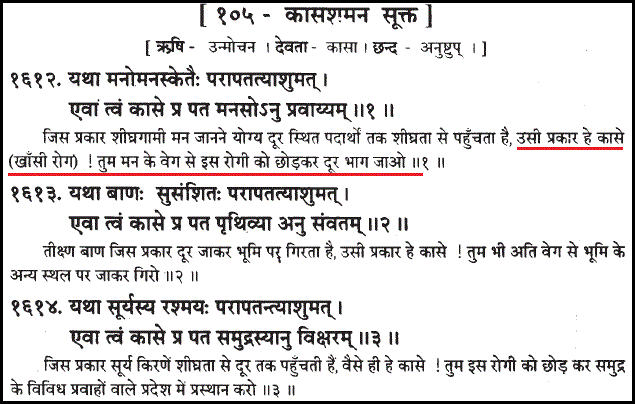 “Just as the fancy flies forth with conceptions of the mind. So following the fancy’s flight, O Cough, flee rapidly away. Just as the arrow, sharpened well swift to a distance flies away, So even O Cough, fly away along the broad expanse of earth. Just as the beams of light, the rays of Sūrya, fly away. So, O Cough! fly rapidly away over the current of the sea!” (Atharvaveda 6:105)

2. The Charm for the recovery of dangerously sick man is mentioned in Athavaved 3:11. One incantation reads

“If life in him declines or has departed, if on the very brink of death he totters, I snatch him from the lap of dissolution, I free him now to live a hundred autumns.” (Atharvaveda 3:11:2)

Reciting this incantation can ensure that you will live for a hundred years.

3. Again, for longevity the prescription given in Atharvaveda 19:32 is that if Darbha (a kind of sacred grass, also known as Kusha grass) is tied to a person, he is expected to live long. Atharvaveda 19:32:1 says,

“Hundred-jointed, hard to be stirred, thousand-leaved, uplifting; the darbha that is a formidable herb, that I bind on you for prolonged life.”

4. Prayer for the flirt:

Interested in securing love of a woman? The Atharvaveda has a charm for that too in 6:8: 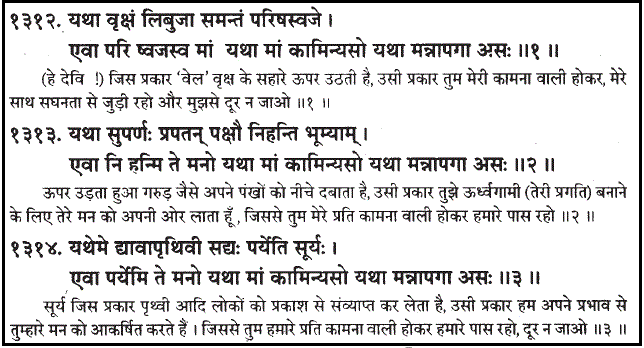 5. Prayer for freedom from curse:

The remedy for ‘curse-disease’ in the Atharvaveda is: 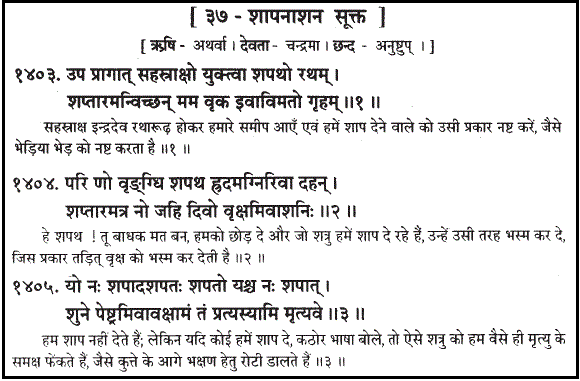 “1. Hitherward, having yoked his steeds, came curse, thousand-eyed, Seeking my curser, as a wolf the home of one who owns sheep. 2. Avoid us, O Curse! as consuming fire avoids the lake. Smite you the man who curses us, as the sky’s lightning strikes the tree. 3. Who curses us, himself uncursed, or, cursed, who curses us again, Him cast I as a sop to Death, as to a dog one throws a bone.”

6. Medicine which protects one from nightmares and all diseases.

In the 3rd Sukta of the 10th Kaand of the Atharvaveda, there is a medicine which secures long life, health, prosperity and fame.  Don’t expect too much. The medicine is nothing but an amulet (mani) called Varana. Atharvaveda 10:3:3,4 says,

“This charm, this Varana heals all diseases, bright with a thousand eyes and golden glister. This charm shall conquer and cast down your foemen. Be you the first to slay the men who hate you. 4. This will stay witchcraft wrought for you, will guard you from the fear of man: From all distress and misery this Varana will shield you well.”

In the 32nd Sukta of the 2nd kaand of Atharvaveda, there is a prescription for destroying pests:

“Like Atri I destroy you, Worms! in Kanva’s, Jamadagni’s way: I bray and bruise the creeping things to pieces with Agastya’s spell. (Atharvaveda 2:32:3)

If you are feeling impotent, Atharvaveda has a rememdy for you. It is mentioned in Atharvaveda 4:4:1

“You that the Gandharva dug for Varuna whose virility was dead, you here do we dig, a penis-erecting herb.” (Atharvaveda‘ 4:4:1)

9. Prayer to deal with the rival mistress:

There is yet another prayer to deal with the rival mistress. It teaches a jealous wife how to ge rid of a rival wife. Can you imagine what would happen if both were to use the same charm? The charm is mentioned in Rigveda 10:145 and repeated in Atharvaveda 3:18. I reproduce for you two mantras i.e. Rigveda 10:145:2,3.

“2. Auspicious, with expanded leaves, sent by the Gods, victorious plant, Blow you the rival wife away, and make my husband only mine. 3 Stronger am I, O Stronger One, yea, mightier than the mightier; And she who is my rival wife is lower than the lowest dames.”

10. Prescription for heart trouble and jaundice

In the Rig Ved 1:50:11,12), there is a ‘prescription’ for removing heart trouble and jaundice. It runs as follows:

“11. Rising this day, O rich in friends, ascending to the loftier heaven, Surya remove my heart’s disease, take from me this my yellow hue. (jaundice) 12. To parrots and to starlings let us give away my yellowness, Or this my yellowness let us transfer to Haritala trees.”

Why transfer the jaundice to poor parrots? This is totally ridiculous.

A long list can be drawn on this line. However, if we analyse all the prescriptions, we can divide them into three categories:

(1) There are some verses wherein only the word ‘aushadhi’ (medicine), is used. What that medicine was, is not clear. So, such verses are of no use from the point of view of medical science.

(2) Some other verses only dictate to the diseases to go away. Apparently, it is expected that the power contained in the verses would cure a sick person or the gods would accede to his prayer and help him get well. This is nothing but superstition. Hence these verses are of no use to the modern man.

(3) However, there are verses which mention the name of the medicine. But most of the verses are not concerned with drug value of the medicines. Instead, they rely on supernatural powers associated with the medicine. For example, the knot of Kusha grass is supposed to destroy enemies and the knot of Udumbra bring good luck to the wearer. That is why the Atharvaveda 19:34:7) says that no old or recent medicine can equal the amulet of Janginda (name of a herb).

The reason for the reliance on the supposed supernatural powers of the medicines was the belief prevailing then that the diseases were caused by the evil influence of some demon or spirit. A study of Atharvaveda would give the impression that the earth was densely populated by demons and spirits and they interfered with human activity very often. It is not surprising then that the treatment of diseases, in good part, consisted in propitiating demons or spirits or trying to ward them off by various devices – amulets and charms and incantations and prayers. Drugs, perhaps, came last.

In short, it can .be said that the approach of the Vedas to the treatment of diseases is based on magic, demonology and witch-craft.

Though Ayurveda is supposed to be medical science, it is also clouded by demonology – the doctrine that diseases are caused by demons. Demonology, in fact, constitutes one of the eight parts of Ayurveda. Demons are recognised as originators of disease, and incantations as remedies, just as we find in the Vedas. This is called Bhoot Vidya. Explaining this Vidya, the Sushrut Samhit says:

In a nutshell, we can say that though the Ayurveda is an independent branch of knowledge, it remained eclipsed for a long time by the primitive crudity of the Atharvaveda. In this way, the Vedas, instead of being the originators of the medical science, proved a big hindrance to the progress of medical science. Therefore, it is wrong to claim that Vedas contain all knowledge about medical science. Had Vedas contained such knowledge, all Vedic pandits would have been doctors. To run after Vedas in the search of medicines for diseases would yield no result. And anyone who studies Vedas with this end in view is bound to be disillusioned.