Majority of  the Hindu and Non Hindu scholars of Vedas accept Vedas to be of a finite date. Only a minority of Hindus especially the Arya Samajis claim that the Vedas are eternal and beginningless. This they try to explain only by mere conjecture and some philosophical gymnastics. As far as the tangible evidence is concerned, there is no reason to believe in this myth of Vedas being eternal. We will  analyse this topic  from many angles and thus build a coherent view that Vedas are of a finite date. When the finite age of the Vedas is established, it will bring to rest many false theories and questions that are built on this supposition that Vedas are eternal.

This article besides showing that the present Vedas are not eternal, will also throw some light on the much debated topic of Aryan invasion of India. It is worth noting that many foreign nations came to India. The Scythians, The Mughals, The Afghans and The Arabs, all came here and were victorious. Thus, the farther we look back in history; we come to know that this nation has always been overrun by foreign powers. However, the opposite wave, i.e. the inhabitants of this area (whoever they would have been) going and overrunning foreign lands is not established. Thus if we establish that Sanskrit and Persian languages have a lot in common, it will follow that Sanskrit (and hence the Vedas) have origins in the Persian language and religion as it were the Persians who come here and not vice versa.  It will also allow us to establish that what we know as Hinduism is not the indigenous religion of India, and hence the extremist hindus have no ground to question the presence of Islam in this country.

Those things which are related to humans in such a way that we use them almost daily and we take their names in our daily life, are very similar in Sanskrit and Persian. This is significant evidence that Aryans came from Iran (Persia) into India and settled here. Thus, Vedas which are written in Sanskrit and related to the Aryan people can in no way be eternal.

To prove this from the linguistic perspective, I will present before you a comprehensive list of similar words in Persian and Sanskrit. The words will be transliterated in English, so that it becomes easy to understand the similarity in the pronunciation. 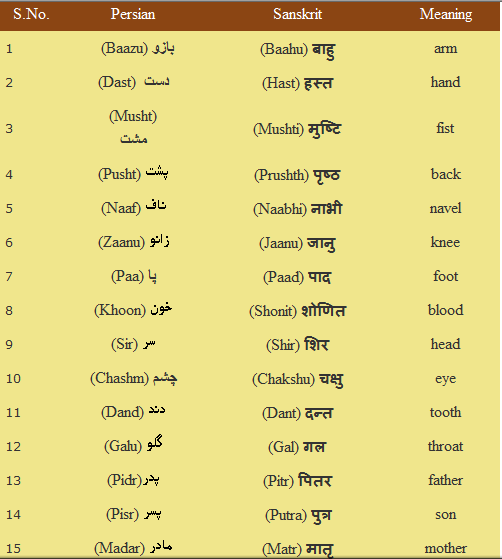 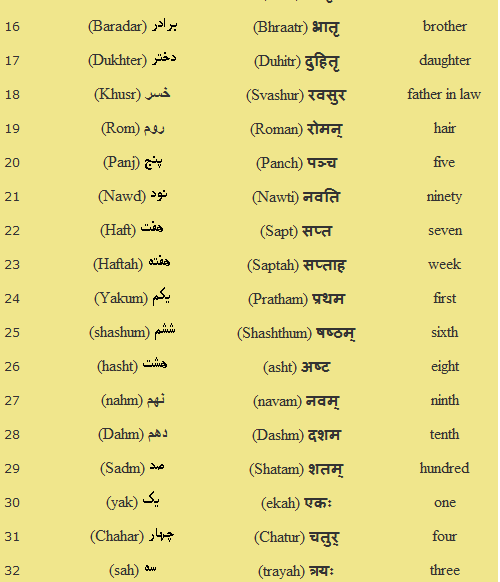 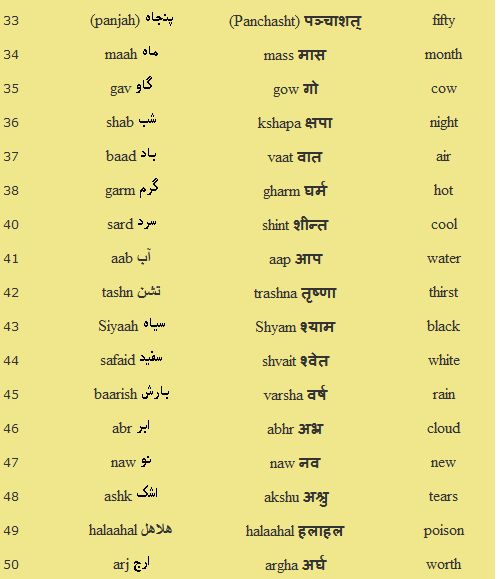 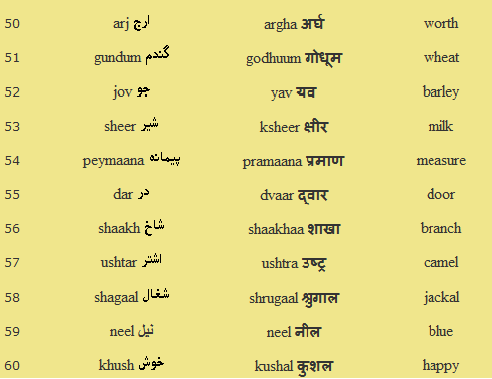 The list of such type of similar words goes upto thousands. However, to avoid making this article too long, I have provided only 60 words, to make my point. I feel this is sufficient to establish that Sanskrit has been derived from Persian or both have the same origin.[1] Since the Vedas are in sanskrit and we have shown that sanskrit is itself a derived language, it proves that Vedas have been written at a finite date in history. This was the linguistic evidence.

2. INTERNAL EVIDENCE (WHAT DO THE VEDAS SAY?)

Let us take a look at some Vedic Mantras which falsify the claim that Vedas are beginningless. I will provide the scanned images of the orginal text plus the hindi translation by Arya Samaj as well as the English Translation and my comments.

1. Following is the scanned image from Yajur Veda Adhyay (Chapter) 13; Mantra (Verse) 37 and then the english translation.

“O Learned man! You have gained knowledge from ancient scholars. You are charitable. Join your trained horses to your chariots, ready to face your enemy and establish yourself on the throne on justice.”

The mantra is clearly referring to ancient scholars who were well verses in the ways of warfare. Thus the Vedas were compiled in the times when civilization had progressed to the extent that chariots were used and warfare was known. 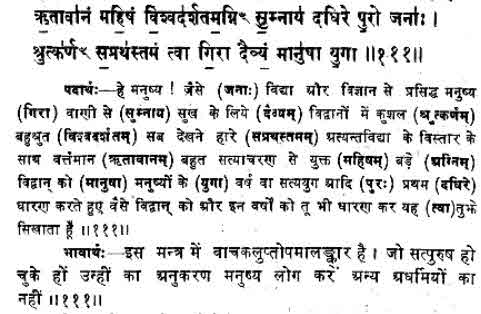 “O Man, follow thou the scholars, those who are aware of the ups and downs,  those who have extensive knowledge, who are righteous, who passed away in the first age (Satyug). This is what I command you.”

It is clear that these verses, and hence the book, have been written after Satyug, which is believed by Hindus as the first age in their division of time periods. So Vedic finite nature is established. 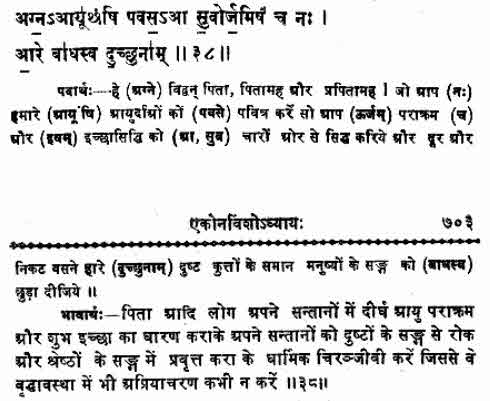 “O our Father, Grandfather and Great-Grandfather. Purify our life. Fulfill our wishes and our hard work in all ways. Keep us away from those evil dog-like humans who live near and far.”

I can go on and on posting passages from the Vedas which refute the claims of Vedas being from the beginning. But, it will make the article too long. So I will suffice with mere references, like the one presented above, which throw more light on this topic. Yajur Veda 34:16 speaks about ancient knowledge and scriptures (Puranas and other shastras), which were present before the Vedas. Same is mentioned in Yajur Veda 34:27.

3. ARE VEDIC TEACHINGS VALID OR OBSOLETE?

Now I wish to explore whether the teachings of the Vedas are applicable for all times or not. The main principle of Religion is to make a disciplined individual with an exceptional morality. A Book which is upheld as a constitution for human living must provide ways of knowing God, of worship, of handling wordly affairs, social system, solid principles for a clean culture. However, when we study the Vedas, we find it devoid of all these points.[2]

RigVeda mentions numerous gods (devataas). When it mentions Agni, we feel that Agni is the supreme deity and no other is equal to Agni. But when we read about Indra, we feel Indra is the supreme and no one is comparable to Indra[3]. In total, there are 33 gods that are divided into 3 categories; 11 of the heavens, 11 of earth and 11 of water. Later these 33 gods increase in number and become 330 million[4].

The whole 9th Mandal (Book) of RigVeda has ended with praising the Soma Juice (Soma ras). The Soma god (Devataa) is on the same level as Agni. There has been a dispute concerning this Soma Juice between traditional sanskrit scholars and Swami Dayanand. Some say it is the name of wine, some consider is as bhang, a preparation from the leaves and flowers (buds) of the female cannabis plant. Swami Dayanand and his followers say that Soma was a plant used to make an energizing drink but surprisingly it has become extinct and we cannot find it anywhere today. This implies that an entire Mandal (Book) of RigVeda has become useless.

I will give you extracts on various topics from the Vedas, so that you may yourself assess the level of its teachings.

“Those desiring to perform Yagya (fire ritual) have given you Soma from the waters… That Soma is majestic, imperishable, having lot of hair on it, and oblique on the edges.” [Rig Veda Mandal 1; Sukt 135; Mantra 6]

Notice that the Mantra calls Soma as imperishable (नाशरहित) and Arya Samaj and other scholars say that it has perished. So either they must accept that this Vedic Mantra has been proven false or accept that the Vedas are promoting crime because the only option left for them is that Soma is wine or bhang, both intoxicating substances.

Like the Mantra above there are numerous other Mantras encouring people to drink Soma Juice aka Bhang. So you can yourself assess what kind of a book will promote this vice and can it be considered as divine scripture? Some of the other Mantras of Rig Veda mentioning Soma are 1.130.2; 3.58.4; 6.44.21; 1.137.2; 1.176.5; 1.168.3. These show that at the time of the writing of Vedas Soma Juice aka Bhang was consumed at lot.

What kind of a book will pay homage to looters, dacoits, land-grabbers, theieves, and murderers? Can this book be a guide for humanity? Notice that the sanskrit word that has been translated as Homage is Namah (???). So there are no doubts about the fact that Vedas glorify crimes and criminals. Sorry for being offensive but the text is clear. So those Arya Samajis who unnecessarily point fingers at Islam should check their own books.

Even after these passages from the Vedas have been presented can any anti-Islamic Arya Samaji dare to claim Vedic teachings as eternal? These teachings can in no way be accepted.

Mitra, of holy strength, I call, and foe-destroying Varuna, Who make the oil-fed rite complete. Mitra and Varuna, through Law, lovers and cherishers of Law, Have ye obtained your might power Our Sages, Mitra-Varuna, wide dominion, strong by birth, Vouchsafe us strength that worketh well. [Rig Veda – Mandal 1; Sukt 2; Mantras 7-9]

From the above analysis any logical person can conclude that claim of Vedas being eternal is merely a hoax and moreover they cannot be the ultimate guide book for humanity.

May God always guide us to the truth and keep us firm on it.

[1] This is the opinion of the majority of scholars.

“The Vedas do not contain a systematic account of dharma. They indicate the ideals and mention certain practices. Rules and commands, as distinct from instances of conduct, are found in smritis and dharmashastras, which are practically synonymous. Smritis literally refer to what is remembered by the Sages, who are well versed in the learning of the Vedas. Any rule in a smriti for which a Vedic source can be found becomes invested with the suthority of the Veda.” [Religion and Society, Page 109]

[4] See The Cultural Heritage of India, P.8,9 by Swami Shraddanand