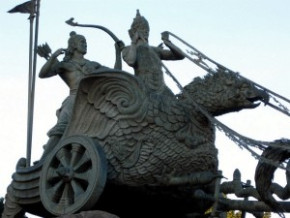 Statue of Krishna and Arjuna at Jakarta Main Square in Indonesia.

With the escalation of Hindu-Muslim tension in India, Hindutva ideologues have started to brainwash Indian Hindus by trying to instill in them a sort of existential dilemma. They reason that Islamist Jihad in India will result in a situation where no Hindus will be left to live in Bharat. In order to substantiate their claim, they cite the example of Muslim majority Pakistan and Muslim majority Kashmir. When Pakistan came into being in 1947, the Hindu population of the state ran in double digits (percentage wise) but gradually this figure has descended to a percentage or two. Similarly, the ethnic cleansing of Kashmiri Pandits from the Valley has led to over 90% of the Kashmiri Pandits being forced out of their homes. Islamophobic intellectuals in India have stated that these warnings should not be taken lightly by the Hindus as Muslims are on a mission to convert India into Darul Islam. I wonder whether these academicians really understand the meaning of the term Darul Islam (Abode of Peace) which has been used in the Quran to describe heaven and not some Muslim majority country ruled by the Sharia as some Islamophobes would have us to believe.

If there is any person who is worried about the fate of Hindus in Muslim majority countries and intends to know whether the two communities can co-exist in such a situation then that person should look at Indonesia, the country with the highest number of Muslims in the world. According to the 2010 National Census of Indonesia, the island nation’s human force stands at 237.6 million. Muslims form the majority with 87.5% of the population. Christians happen to be the major minority in the country with 9% stake in the population whereas Hindus and Buddhists form 3% and 2% population share, respectively. Indonesia happens to be a secular state and the guiding force behind the idea of Indonesia is the Pancasila. The Constitution of Indonesia was formulated by such secular fundamentalists that in August 1945 they unanimously ratified and agreed upon the usage of the term “Tuhan” instead of “Allah” in the Indonesian Constitution. This was done particularly to strengthen the confidence of minorities like Hindus who preferred using the term “Tuhan” and could connect with it. On the same day ie 18th August, 1945 the constitution makers modified the first principle of the Pancasila from “Belief in Almighty Good with the obligation for its Muslim adherents to carry out the Islamic Law” to “Belief in Almighty Good”. This made the Indonesian Constitution all the more secular. 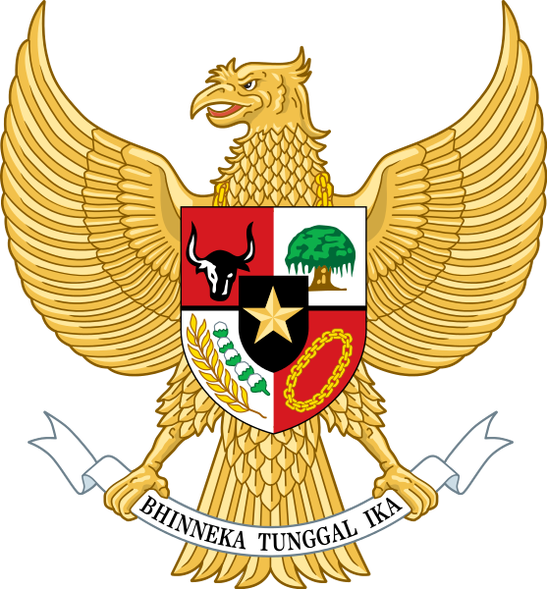 Garuda Pancasila is the National Emblem of Indonesia. It has been inspired by the Hindu mythological bird, Garuda.

The official motto of Indonesia is “”Bhinneka Tunggal Ika” which can be translated as “Unity in Diversity”. The term unity and diversity is said to have been originally coined by Bahai Ullah, the founder of Bahai Faith. The national emblem of Indonesia is called Garuda Pancasila. In Hindu mythology, Garuda is a bird of great significance as it is the vehicle of Lord Vishnu. One of the most important Hindu scriptures called Garuda Purana describes the conversation between Lord Vishnu and Garuda regarding afterlife. Garuda Purana is also recited in Hindu households after someone passes away. Indonesia’s national airline has also been influenced by this bird of Hindu mythology and is called Garuda Indonesia. Lord Ram’s beloved “Hanuman” who appears in the Ramayana is the official mascot of Indonesia’s military intelligence. The National flag of Indonesia called the “Sang Saka Merah-Putin” (meaning “The Sacred Red and White”) has been influenced by the banner of Majapahit empire which was at the time of 13th century one of the largest empires of the region. Hinduism and Buddhism were the dominant religions in the Majapahit Empire.

Inscription of Lord Ganesh on an Indonesian currency note.

Senior BJP leader and Former Deputy Prime Minister of India, Lal Krishna Advani visited Indonesia in July 2010 to attend the World Sindhi Conference in Jakarta. It is noteworthy to mention that Advani used to be the poster boy of Hindutva in India as it was him who headlined the Ram Janmabhoomi movement and ensured the rise of Hindu nationalism in the country. During his trip, Advani was left awestruck because of the pride bestowed upon Hinduism by Muslim majority Indonesia. On his return to India, he wrote a blog titled “Hindu influence in Indonesia” on 17th July, 2010. He concluded that write up with the following words, “Indonesia, I must say, seemed to know and cherish Ramayana and Mahabharata better than we (Indians) do.” Advani mentioned in his blog about the Ganesh inscription on a high denomination currency note of Indonesia ie 20,000 rupiah.

The official logo of the island of Bali in Indonesia represents the Three Gods of the Universe ie Brahma, Vishnu and Shiv.

During his stay in Bali, Advani encountered the newly adopted logo of the island of Bali which in Advani’s words was a “manifestation of country’s Hindu traditions.” A publication of the Indonesian Ministry of Tourism described the logo as follows, “The triangle (shape of logo) is a symbol of stability and balance. It is formed out of three straight lines in which both ends meet, taking the symbols of a blazing fire (Brahma – The Creator), lingga or phallus. The triangle also represents the three Gods of the Universe (Trimurti – Brahma, Wisnu and Siwa), three stages of nature (Bhur, Bwah, Swah and Loka), and three stages of life (Born, Live and Die). The tagline ‘Shanti, Shanit, Shanti’ represents peace be upon Bhuwana alit dan agung (yourself and the world) which will deliver a sacred and holy vibe that awakens a deep aura that balance and make peace to all living creatures.” During his short trip to Indonesia of 4 days (2 days in Bali and 2 in Jakarta), Advani also saw the Krishna-Arjuna Statue at Jakarta main square. While Advani was in Denpasar, capital of Bali, he saw another statue which even he was unable to decipher. When he inquired about the statue from the driver of his car, the driver replied, “This is a depiction of the Ghatotkach from Mahabharata.” 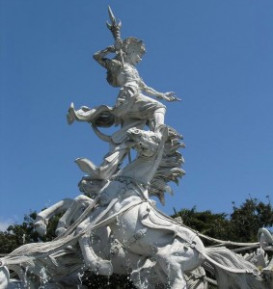 Statue of Ghatotkach in Indonesia.

The driver’s answer won Advani’s heart. Advani wrote, “Indeed, even in India very few would be able to identify who Ghatotkach is. And here was the driver of our car knowing full well both Ghatotkach as well as his relationship with Bheema.” Indonesia’s pluralism and its respect for the various religious traditions being practised in the country is a matter of great pride for the entire world. The world’s largest Muslim majority country stands as a testimony for those who believe that societies which are dominated by Islam do not even exhibit the slightest form of tolerance. Advani’s respect for Indonesia stems from Indonesia’s respect for Hinduism. We hope and pray to God that Indonesia continues to prosper and remains a citadel of peace and tolerance across the globe. Advani stated in his blog, “In Indonesia, the names of places, of people, and the nomenclature of institutions also give one a clear impression of a benign Sanskrit influence.” We hope that this vibrancy of Indonesian culture never ceases and continues its existence till eternity.