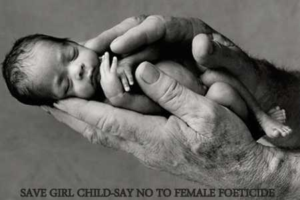 Female foeticide is undoubtedly one of the most inhuman practices that plagues our society today. A lot has been said and written on this sensitive topic. The recent discussion on Aamir Khan’s show Satyamev Jayate has once again brought the issue to public attention.

In the discussions that followed the verse यत्र नार्यस्तु पूज्यन्ते रमन्ते तत्र देवता  (Devatas reside where women are worshipped) was used repeatedly. This painted a misleading picture of the ancient indian society suggesting that misogyny sprung up from nowhere. A closer examination reveals, however, that this verse from Manu Smriti has been divorced from its context and the word “पूजन” or “पुजा” has been interpreted rather arbitrarily to suit a particular view. We reserve the discussion of this verse for future articles.

Earlier there were 40 accepted Vedic sanskar (sacraments), now however only 16 of these are conducted. The first of these 16 sanskar is that of “Garbahabhan” (conception), the second being “Punsavan”. Before coming to the main subject of the article, I would like to place before the reader a few facts about these sanskar (sacraments).

What follows is a brief analysis of these sanskar (sacraments) and the caste system. In Hinduism the evil of caste gets associated with the person from his birth itself. On the face of it Swami Dayanand and Arya Samaj seem to reject the birth based caste system and accept a social system based on merit but do they practice what they preach? To investigate this let us consider the following three verses from Manu Smriti. The first two of these occur as they are in Swami Dayanand’s Sanskar Vidhi published by Arya Sahitya Prachar Trust (Arya Samaj)

(A)”Garbhan and other Sanskar (sacrament) of dwija should be performed with holy rites prescribed by the Veda. Because these sanctify the body and purify in this life and after death” ( Manu Smriti 2-26)

(C)“Let (the first part of) a Brahmana’s name (denote something) auspicious, a Kshatriya’s be connected with power, and a Vaisya’s with wealth, but a Sudra’s (express something) contemptible.

(The second part of) a Brahmana’s (name) shall be (a word) implying happiness, of a Kshatriya’s (a word) implying protection, of a Vaisya’s (a term) expressive of thriving, and of a Sudra’s (an expression) denoting service.” [Manu Smriti 2/31-32]

Here it has been advised to name a child in the naming ceremony (10 days after birth) according to the above mentioned rules.

Whether such practices can remedy deficiencies of semen or womb is irrelevant but a number of questions arise after reading the above, why is this practice limited only to the Dwijas (Brahman, Kshatriya and Vaishya)? What is the basis of this distinction drawn between the Dwijas (referred to as ‘twice-born’ henceforth) on one hand and the Shudras on another? Certainly there is no difference in merit of 10 days old twice-born and Shudra, then why is a child born in Shudra family believed to be a ‘Shudra’ and has ‘das’ appended to his name? These people who keep insisting that Varna system is not based on birth but on merit have no answers to these questions.

Shri Damodar has named the section where he explains this sukta as “Certain birth of son” this in itself explains the term ‘Punsavan’. Swami Dayanand’s associate who later became the leader of Sanatan Dharma, Pandit Bhimsen Sharma while explaining the ‘Punsavan’ writes,

In other words the sanskar (sacrament) is conducted so that a male child is born and if the unborn child is female then it should be transformed to a male child. This is the ancient Vedic way of getting rid of female foetuses. Even if we leave aside the question of effectiveness of such a procedure, the mentality operating behind such practices can be easily seen. If the female foetus itself is converted to male foetus then there is no question of birth of girls. This indicates that why even today people do not wish a girl child to be born to them.

While today, scientific methods are used to detect the sex of the foetus and to kill it if it is a girl, in Vedic times the foetus itself was transformed (at least people wished to do so) to a male foetus. The underlying mentality is same, only the methods have changed.

Swami Dayanand presents five proofs related to Punsavan Sanskar, without mentioning their meaning. However, the meanings given by other Arya Samaji Scholars make the picture clearer. Below is the meaning given by Ramgopal Vidyalankar in his book titled Sanskar-Prakash Arthart Mahrshi Dayanand Sarsvati Parnit Sanskarvidhi on pages 43-44

“Agni, Indra, and learned scholar of diverse disciplines – give you strength. May you get a strong son and let even his descendent be strong.” [Mantra Brahman 1/4/9]

“’Punsavan is done after a man as virile as a horse conceives a woman calm by nature as it is the best solution to get a son. The sanskar (sacrament) is conducted on women.” [Atharvaved 6/11/1]

“The peepal tree growing on a Shami tree should be powdered and should be consumed with honey or milk etc. This makes the woman’s womb capable of producing a son. This medicine should be given to a woman who gives birth only to girls. This changes their womb and may generate strength to produce a male child.”

“God Prajapati has said that semen definitely is in man, this is nurtured in the woman and thus a son produced.”

Shri Damodar explains this as

Let us turn to the 3rd verse.

“Prajapati, Anumati and Siniwali (Sanvatsar, Pournima and Amavasya) complete the foetus. The rules concerning the birth of female are mentioned elsewhere, the rules related to male are described here.”

The first and second are given these scholars

So, these are the verses used to prevent a female child from taking birth and ensuring the birth a male child. It would not be wrong to call this the ancient and Vedic version of female foeticide. The Hindu scriptures enjoining ‘Punsavan’ fail to even mention the sanskar (sacrament) named “Straisuy”

Swami Dayanand writes the meaning of this verse as follows

O majestic man capable of nurturing semen! Give a married woman or widow the best son and grant her good fortune. Produce 10 sons for a married woman and consider the 11th to be a woman.

This makes it clear that the birth of a girl is neither desired nor considered good since ancient times. However such verses can neither change the way sex is determined nor can they prevent the birth of a girl child. As such a girl once born has to be accepted. But nothing changes after this

In the ‘Harish-Narad dialogue’ in Aitreya Brahman which is an explanation of the Rigved, Narad says:

“Daughter leads to suffering and is a cause of misery”

While explaining this, scholar Sayancharya quotes an ancient verse

“When a girl is born, she makes relatives unhappy; when she gets married she takes away wealth. She commits a lot of mistakes in her youth that is why it is said that she cleaves her father’s heart”

Yaska Acharya writes with respect to ‘daughter’ in his Nirukt

“Daughter is called Duhita because she is Durhita (one who does bad) and Durehita (it is better if she stays far away). She is Dogdha (one who sucks parent’s wealth)” – (Nirukt Adhayay 3, Khand 4)

In the next Adhyay of the same book, while explaining the word  ‘Kanya’ Acharya Yaska writes,

These examples show the negative view associated with the birth of girl in Hindu culture and Hindu religious scriptures. It is this mentality which is criticized in the Qur’an in the following words –

And when one of them is informed of [the birth of] a female, his face becomes dark, and he suppresses grief. He hides himself from the people because of the ill of which he has been informed. Should he keep it in humiliation or bury it in the ground? Unquestionably, evil is what they decide. (Qur’an 16/58-59)

Allah, the Exalted puts an end to the discrimination between a boy and a girl in the Qur’an

A point worth noting is that in this verse daughters are mentioned before sons. Commenting on this verse Sayyidina Wathilah ibn Aska said, fortunate is the woman who has a daughter as her first child.

Prophet Muhammad (peace and blessings of Allah be upon him) said,

If anyone has a female child, and does not bury her alive, or slight her, or prefer his sons to her, Allah will bring him into Paradise. [Narrated by Abdullah ibn Abbas; Abu Dawud, Kitaab al-Adab, Hadith 5127)

To conclude, I would like to say that to put an end to the evil practice of female foeticide and the negative view associated with a girl child, the mentality operating behind these needs to be destroyed. How do we do that? Well,